India’s First Robotic Wedding – With an interesting twist at the end! 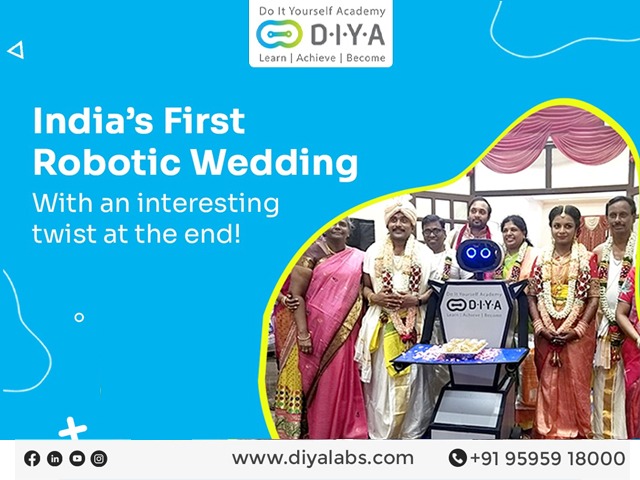 A wedding is a joyful affair that requires a lot of work to be done. And a lot of the work can keep parents and relatives busy with little chance to savor the moment for themselves. However, on 21st November, 2021, marriage ceremonies were changed forever! The marriage of our Chairman, Mr. Udhay was a great opportunity to show the world just how amazing an Indian Robotic Wedding can really be; and how easy it is to have one! Robots were welcoming guests, playing the music, keeping the children entertained, and so much more! We welcome you to take a good look at the amazing Robots we saw at the wedding and what they were doing!

Of course, no marriage would begin without someone taking the time to greet the guests. And that’s exactly where the head robots come in. Taking the role of welcoming those who attend the wedding, these robots are automated to an extent in order to ensure that they are able to greet newcomers without fail. The code and the sensors implemented in the two head robots (one male and one female) ensured that they could flawlessly greet the arriving guests with the ceremonial rose-water and sweets.

Otto was set to Auto in the wedding!

Otto is our in-house 3D Printed robot, and we use this model to help children learn how to program robots. However, for the Robotic Wedding, we had a completely different plan in mind. We transformed 11 of these delightful educational robots into intelligent distributors of information. People were able to see details like the time of the ceremony, the names of the bride and groom, customized greeting messages, and more!

The Wedding music was Ottoly Ambient!

The Ottoly model is much like our dear Otto, except that the Ottoly comes with more versatile movement options and a built-in speaker. We programmed five Ottolys to take over the musical responsibility and created a faux wedding orchestra. We were thrilled to see people enjoying the music while being intrigued about the dancing Ottoly robots that seemed to move with a spring in their step.

The Ranger of the blessing

We also designed the Ranger Robot in-house from scratch, one whose primary purpose is to make sure all guests have the akshadam they need in order to bless at the right time. And how does this happen? The Ranger is specifically radio-controlled to ensure optimum efficiency and maintain tradition. The Ranger has shown us all the potential of what’s possible when we at DIYA put our minds together. The ranger was conceived and built in less than a span of a fortnight, and comes with all the perks associated with an advanced robot.

The kids were playing robot soccer!

Given that we prioritize children when it comes to our education, it is natural that we would do the same even during a wedding. We brought one of the world’s most popular games to life with remote-controlled cars and a soccer ball. With two cars on each side, four children found themselves engaged in an exciting game of soccer where each team tried to use their robot to win! Our only concern was that quite a few adults wanted to play too! (And that’s okay;)

The mechanical arm is an industrial robot designed to lift and move heavy loads on factory floors. However, for the wedding, we programmed it to do all sorts of things and even made the arm programmable by children. Of course, the main issue was making sure no one would try to pick someone else up with the mechanical arm! The main reason to have it was to show children what could be possible if they were to look into the realm of robotics. What we didn’t expect was for adults to want a closer look too!

Love comes in all shapes and sizes… so did our 3D Printed Keychains!

We set up a 3D Printer capable of printing almost any shape or lettering a child may desire. Of course, to make sure we didn’t spend too much time on certain complex 3D patterns, we primarily focused on printing alphabetical Keychains on demand. Children were amazed to see the 3D Printer make the keychain out of seemingly nothing! Imagine if they knew that they could make this themselves with just the right training.

Love soars higher than a ROCKET!

We set up a demonstration of Indian-made Rockets and showed everyone present just how amazing it is to watch them fly into the sky. What’s so special about these rockets? Just like human creativity , the rockets are designed to fly as far as possible, and are carefully controlled by ignition sequences unlike what is used by fireworks and pyrotechnics. Each launch was precisely timed and was controlled by a central system.

The Robot’s Intelligence is Artificial, but the Marriage’s Romance is REAL!

Some children and adults would prefer to have a far better version of entertainment, and that’s something we delivered with some of our finest A.Is and the most stunning Animations our team can make. We also created a Shooting Game, a DJ Game, and a few more that some children simply could not stop playing! Quite a few children were surprised to learn that they can make a game like that too.

Every robot and software implemented for this Romantic & Robotic wedding was programmed or coded by the tools we use to teach our children everyday! Children who sign up for our sessions can now take advantage of the exact same tools and will now be able to see just what the tools are capable of. This wedding was more than just a Robotic Wedding, it is a testament to what can be achieved with technology and the will to apply it. Would you like your child to try learning with one of these versatile, easy-to-use tools? Sign them up for our online courses and watch them go! Register with us at www.diyalabs.com and avail a FREE demo session worth Rs. 750 to be held at a time of your choosing.

A romantic robotic tale “The process has changed, but the passion has not” ~ Udhay Shankar Founder, President, Do It Yourself Academy (DIYA).

Click on the link below to Watch what the press had to feature and catch some interesting glimpses of the wedding.